Attorney Grant Stoddard has joined the Feed Iowa First Board of Directors as of May this year. Feed Iowa First is a non-profit organization dedicated to combating food insecurity among Iowans and "growing farmers" at the same time. It was recently featured in the New York Times as an organization worth donating to and volunteering with to assist in the storm-recovery effort. Inspired by the work Feed Iowa First does--in 2019, Feed Iowa First donated over 20,000 pounds of produce to 23 locations throughout the Cedar Rapids area--and his own gardening experiences, Grant found the choice to volunteer an easy one to make. "As a temporary gardener at Temple Square in Salt Lake City back in 2009," he explained, "I would often think to myself as I rode the bus home that much of the unused public spaces around me could easily be converted into gardens to feed the hungry. I did not have the means or the resources at that time to make any of that happen, but now, thanks to a fantastic organization that has already been doing just that for years, I can be part of a small effort to turn that dream into a reality."

Grant is an attorney with a general practice encompassing both business and transactional law and litigation matters. He joined Simmons Perrine Moyer Bergman PLC in 2019, following a judicial clerk for the Honorable Michael J. Melloy of the United States Court of Appeals for the Eighth Circuit. Grant is originally from Utah, where he earned a BA in History Teaching from Brigham Young University and taught history and government classes for four years before attending law school at the University of Iowa College of Law. He currently lives in Cedar Rapids with his wife, four children, and a few tomato plants that survived the August derecho.

To learn more about Feed Iowa First and the work it is doing, click here. 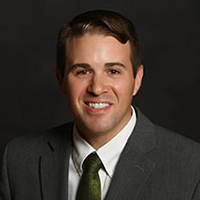